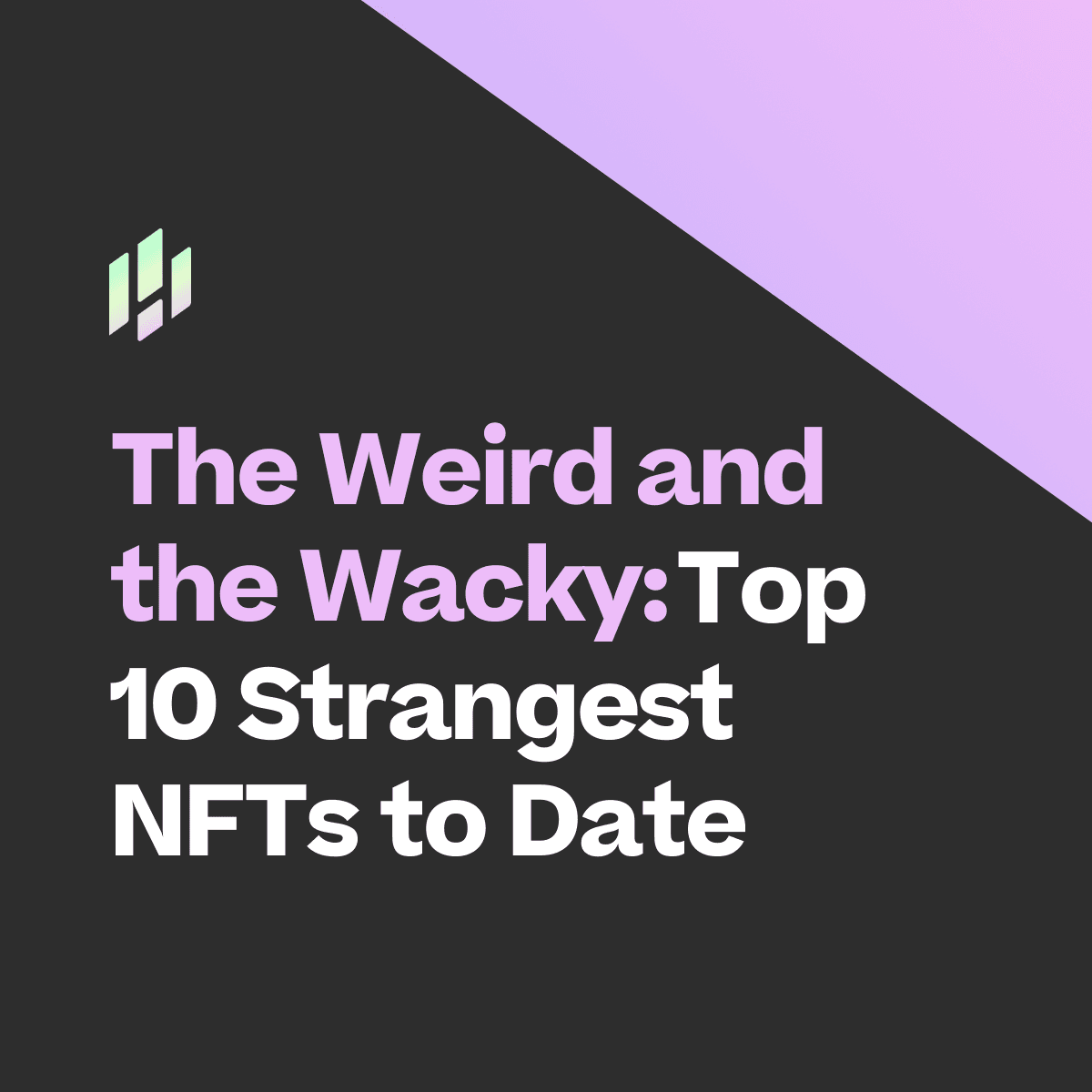 Twitter founder, Jack Dorsey, put up his first ever tweet (also the first tweet to exist on the platform) for sale as an NFT in March of this year. Selling for $2.9M (£2.1M) to a Malaysia-based businessman, all of the proceeds went to Give Directly's Africa Response fund. The tweet, which read “just setting up my twttr”, was published in March 2006. The owner also received a digitally signed certificate from Dorsey, along with the data about the tweet’s time of posting and contents. So just to clarify, this is a tweet containing 20 letters. Quick maths would tell us that’s $145,000 per letter. Not too shabby. You know what they say, a picture speaks a thousand words and a letter speaks 145,000 dollars.

On the topic of selling tweets ... Twitter user Lauren Walker, tweeted about how she’d easily ‘stolen’ a collection of NFTs worth over 8 trillion dollars by right clicking and saving the images to her computer. Lauren unfortunately failed to pre-empt the NFT community’s sense of humour, with a few clever NFT fans taking screenshots and minting them as NFTs on OpenSea making around $5000 for the clever stunt. Well played, well played indeed.

Mmmm. What’s that scent? I’m getting mahogany with notes of circuit board. Or is pomegranate with a tone of smoky blockchain? OK, all jokes aside, Berlin-based Look Labs created the first digital fragrance in April, which has been encoded as an NFT. This one’s pretty cool, using near-infrared spectroscopy (NIRS), they measured the wavelengths of a physical perfume, bottle and label. Look Labs then used the spectrum data in digital artwork, which sold for $18,000 (£13,300). Purchasing the NFT also entitles you to a special edition of the physical fragrance ‘Cyber Eau de Parfum’, complete with light up OLED label.

7: Own your own colour

A 1000 piece collection by BitColors allows you to buy and sell the rights to unique handcrafted colours that haven’t existed before. This one doesn’t need much explaining, but is becoming a popular concept in the NFT world, with tzcolors also launching a similar concept. With the latter, you can own colours like Asda Green, Barbie Pink or Youtube Red.

TP. Toilet Paper. Non-fungible (token) toilet paper. Toilet humour to a whole new level, with Charmin creating toilet paper-themed NFTs. Each NFT comes with a “physical display” and proceeds go to the humanitarian organisation “Direct Relief”. Charmin wouldn’t be the obvious choice of brand to roll out NFTs (all puns intended), but some of the pieces went for over $4000, so they certainly were plopular (sorry I’ll stop).

5: Digital Stick for your dog

Worried about dogs missing out on all the NFT fun being had by their owners? Dog wear brand, Between Two Naps minted a stick from the streets of West Village, New York, as a non-fungible twig. Currently on sale for $1,200, the NFT twig also comes with the physical twig, aluminium display case and presentation stand.

4: Marriage on the Blockchain

Employees of crypto exchange Coinbase, Rebecca Rose and Peter Kacherginsky, showed true passion for their work as they made use of Ethereum blockchain to get married. Involving a smart contract and NFT rings, the wedding cost around $537 versus the eye-watering costs that can crop up in traditional weddings.

This one is pretty much what it says on the tin. Croatian tennis player Oleksandra Oliynykova auctioned off a patch on her right arm for $5,415. A rather exclusive plot of advertising space, Oliynykova already has some tattoos so this project doesn’t faze her but rather she sees it as a direct way to connect with fans.

An arm NFT is pretty wild, but imagine a 34-plot grid tattooed onto your back, each section on auction to purchase. That would be crazy. It’s also exactly what Jason Festa, creative director for cryptocurrency game Upland, has done. Each square is being auctioned on OpenSea, and the owners of each plot get to choose his tattoo. Eek.

Apologies, this one’s quite gross. Couldn’t have been missed off the list though, let’s be honest. Since March 2020, Brooklyn-based film director Alex Ramírez-Mallis has been recording his and his friends’ farts, which he has compiled into a 52-minute (!) symphony. These NFT toots are available as individual farts (starting at $85) or you can splash the cash and buy the “Master Collection”.

What do Paris Hilton, self proclaimed inventor of the selfie, and the Dalai Lama, spiritual leader of Tibet, have in common? Nothing? Incorrect my friends. His Holiness the Dalai Lama has joined a host of other public figures in the NFT world, after Alex Echo’s Official Dalai Lama NFT Collection dropped on Hyprr on Oct 28th. All proceeds from the collection go to the Tibet Relief Fund and The Gaden Phodrang Foundation.